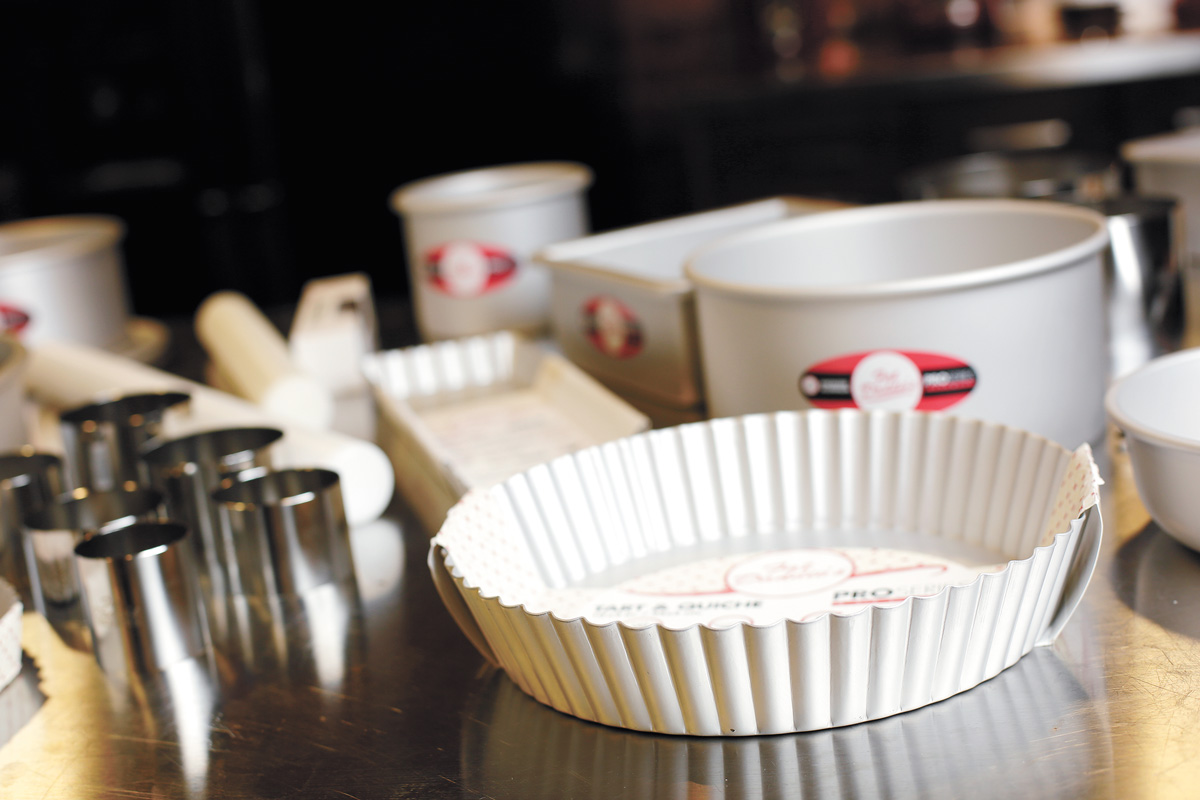 “After we reopened, it pretty much just exploded,” says Eric Frickle, owner of the KITCHEN ENGINE. In fact, the biggest challenge has just been keeping everything in stock — some of the most popular items are on backorder. Some of that’s because manufacturers have cut back their capacity because of COVID challenges.

But a lot of that’s demand.

When people eat out less — whether because of finances or pandemic-related restrictions — they eat in more. And so when you sell tools to make home cooking easier and tastier, it’s a great business to be in.

Everything is selling better, but he’s been particularly surprised by the sales in baking supplies.

“For so long we have been in this weird phase of ‘no carbs.’ Now everybody is like, ‘Screw it, we’re baking,’” Frickle says. “We’ve sold more bakeware in the last three months than we have in the last year and a half.”

The bakeware they sell — everything from square cake pans and round cake pans to bread pans and springform pans — are from FAT DADDIO’S, another local company.

These aren’t the cheap pans that wear out quickly, he notes, this is quality, professional-grade equipment. Other popular items include the Instapot-style all-in-one-cooking gadgets like the Zavor Multicooker — a device Cook’s Illustrated named one of the best on the market a few years ago — and the Breville convection toaster oven, which also doubles as an air fryer and slow cooker. And if you ever cook meat and don’t have a Thermapen-style digital thermometer, you’re recklessly risking turning quality steak into shoe leather.

You might also check out WILLIAMS SONOMA in River Park Square and bring home some fancy dishware, a quality mortar and pestle, or a spiffy spice grinder.

If you’re particularly into dessert baking, check out CAROLYN’S CAKE AND CANDY SUPPLIES. With fewer weddings, graduations or big birthday parties, the cake business has been a bit rough, says owner Char Silva.

“They’re really neat cookies,” says Silva. “You can do a lot with the decoration.”

Carolyn’s sells practically every shape of cookie cutter. Better yet, sculpt with chocolate. Carolyn’s sells everything from conventional caramel or bonbon molds, but also molds in the shape of letters, sporting equipment, even animals.

Of course, great cooking tools are useless without great ingredients.

That’s where some of Spokane’s incredible grocery stores come in handy. Looking to make one of those 26-ingredient moles? Head to DE LEON FOODS for your pick of quality Mexican ingredients. Pick up some cactus paddles while you’re there to make some nopalitos. And don’t overlook the seasonal manzana peppers — a yellow chili with a slightly fruity heats that builds in intensity as you savor it. Perfect for salsa.

And if you’re making Asian food? Head up to BEST ASIAN MARKET — this beloved Sprague Avenue staple closed down during the pandemic, but then opened back up, remodeled and as wonderful as ever. Look up a specific dish — like a sundubu jjigae Korean soup, one of the few acceptable uses of soft tofu — but prepare to be inspired and surprised. You could pick up king oyster mushrooms for grilled skewers, Thai bird chiles for spring roll wraps, duck eggs for a duck egg omelet, and gochujang chili paste for Korean stir fry paste. And always, always bring home a few cans of Thai curry paste and coconut milk. There are few cooking tasks as simple as improvising a curry — and few dishes as tasty.

And then there’s SPICEOLOGY: Whip up a fast sauce for a quick shrimp po’boy sandwich? Mix some of Spiceology’s Black Magic Cajun Rub and some sauce in with some mayonnaise. And if you’re not quite sure what flavor profile you want your meat or veggies to have, you can pretty much never go wrong with Spiceology’s Smoky Honey Habanero Spice Rub, a blend that somehow hits a sweet-smoky-spicy trifecta.