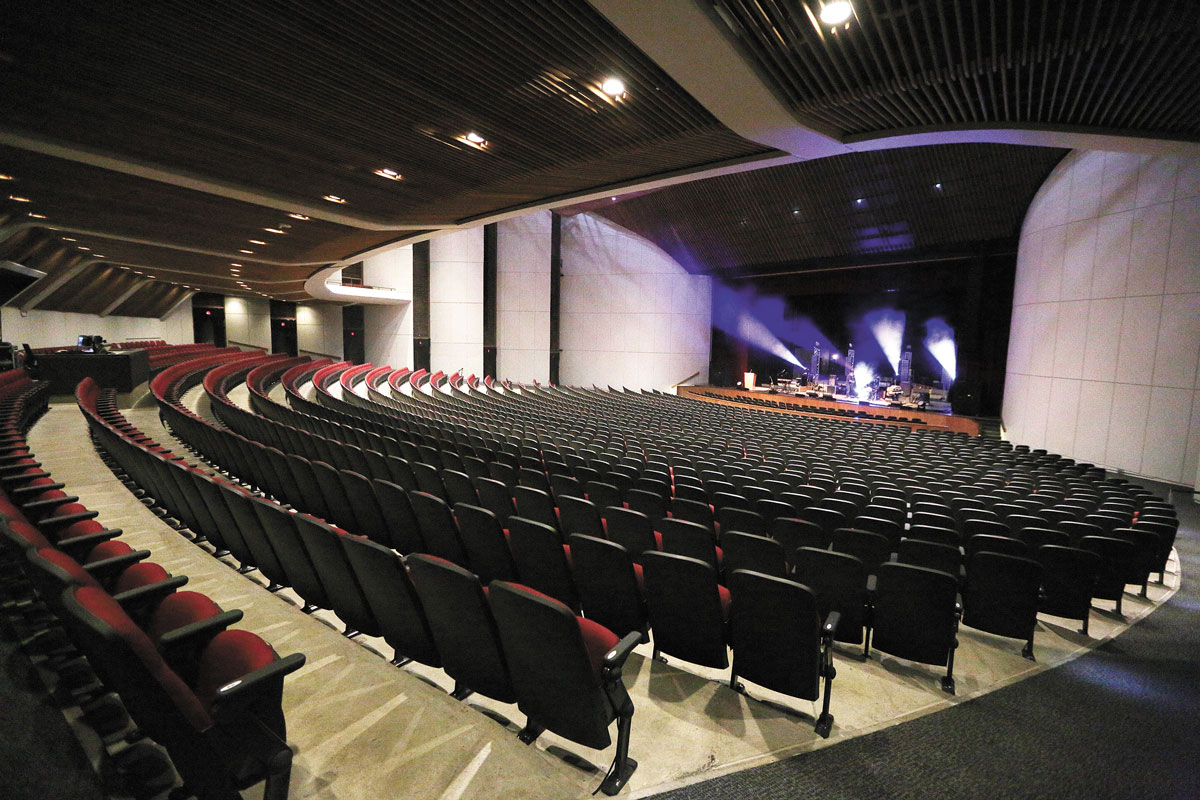 FIRST INTERSTATE CENTER FOR THE ARTS

Nine months ago, local theaters — like all performing arts venues — had to make the difficult decision to postpone the few remaining shows in their 2019-20 seasons. As the pandemic grew in severity, however, they found themselves facing an indefinite period of closure.

Many venues chose to make the most of the downtime. Instead of the usual nonstop cycle of staging one production while preparing for the next, they seized the opportunity to concentrate on general housekeeping, long-neglected inventories and future programming.

“We’ve never been paused this long,” says Jake Schaefer, creative director at the SPOKANE CIVIC THEATRE. “And so, consequently, we’ve never had this much time to pay mind. All that ‘non-space’ space is finally getting looked at. We’ve reorganized. We’ve cleaned up areas. A lot of the backstage areas and storage areas are being evaluated for safety.”

Other theaters, like STAGE LEFT, took the time to strengthen their grant-writing chops. That has since helped them secure much-needed funds from organizations like ArtsWA and the National Endowment for the Arts.

At the same time, Spokane’s theater community is driven by a perpetual desire to create and perform. As the cancellations that cleared their performance schedules in spring and summer extended into fall, the actors, crew and staff looked for new ways to bring entertainment and escape to their socially distant audiences.

And now that winter’s upon us, local theaters large and small are working as hard as ever to continue filling that void. Stage Left is getting into the holiday spirit with An Evening of Carols on Dec. 15 at 7 pm. Hosted by Molly Allen, this livestreamed evening of songs and stories will feature Abbey Crawford, Amber Fiedler, Alyssa Day, Mathias Oliver and many other favorites of the local stage. See facebook.com/StageLeftTheater for updates.

The holidays are also causing SPOKANE CHILDREN’S THEATRE to break out in song. On Dec. 20, SCT is planning to host its first-ever Family Christmas Sing-Along. It will be all the fun of door-to-door caroling but from the comfort of your own home. To find out how and when to participate, visit spokanechildrenstheatre.org.

In collaboration with SPOKANE PUBLIC RADIO, the Civic is presenting an updated version of a play that has long been a fixture of the theater’s holiday programming: Minneapolis playwright Barbara Field’s adaptation of A Christmas Carol. This year, Field has restyled her work once again — but this time it’s for the radio.

On Dec. 11, audiences will be able to tune into this audio version of Dickens’ classic live on 91.1 FM. Afterward you can stream it online right up to Dec. 24. The cast is a veritable who’s who of Spokane’s theatrical talent, including Bryan Harnetiaux, Dawn Taylor Reinhardt, Patrick McHenry-Kroetch, Patrick Treadway, Melody Deatherage, Troy Nickerson, Bill Marlowe and many, many others. You can also catch fun non-holiday-themed performances from the theater’s Civic Presents series at vimeo.com/spokanecivictheatre.

If improv is more your thing, BLUE DOOR THEATRE has been busy putting its own twist on TV. Over the past few months they’ve built up a collection of Zoom-style sketches about chicken nuggets, TikToks riffing on Earth Day as well as different punchlines to Furby jokes. To watch these improv episodes and whimsical thought experiments, visit bluedoortheatre.com and follow the links to their YouTube channel.

For a little more Broadway-style glitz and pizzazz, the acclaimed cast of Jagged Little Pill is reuniting to perform selections from the recent Tony-nominated rock musical as part of a live concert in New York City. Tickets are available through STCU BEST OF BROADWAY, and they’re good for the livestreamed premiere on Dec. 13 at 5pm as well as on-demand access until Dec. 15. Just a few days after that, on Dec. 19 at 7pm, the FIRST INTERSTATE CENTER FOR THE ARTS is presenting The Hip Hop Nutcracker as a streaming event. This is an updated, high-energy dance spectacular set to Tchaikovsky’s iconic music and enhanced by digital graffiti and other cool visuals. For tickets, show details and viewing info, head to firstinterstatecenter.org.

For those who are inclined to charitable giving around the holidays, please bear in mind that nearly all of the theaters mentioned here have donation buttons on their websites. Your support helps them keep creating and operating in the midst of so much uncertainty. Also, during an already trying time, IGNITE! COMMUNITY THEATER has found itself looking for a new host venue. To offer this resilient troupe advice or a helping hand as they search for a new home, reach out to them via igniteonbroadway.org.