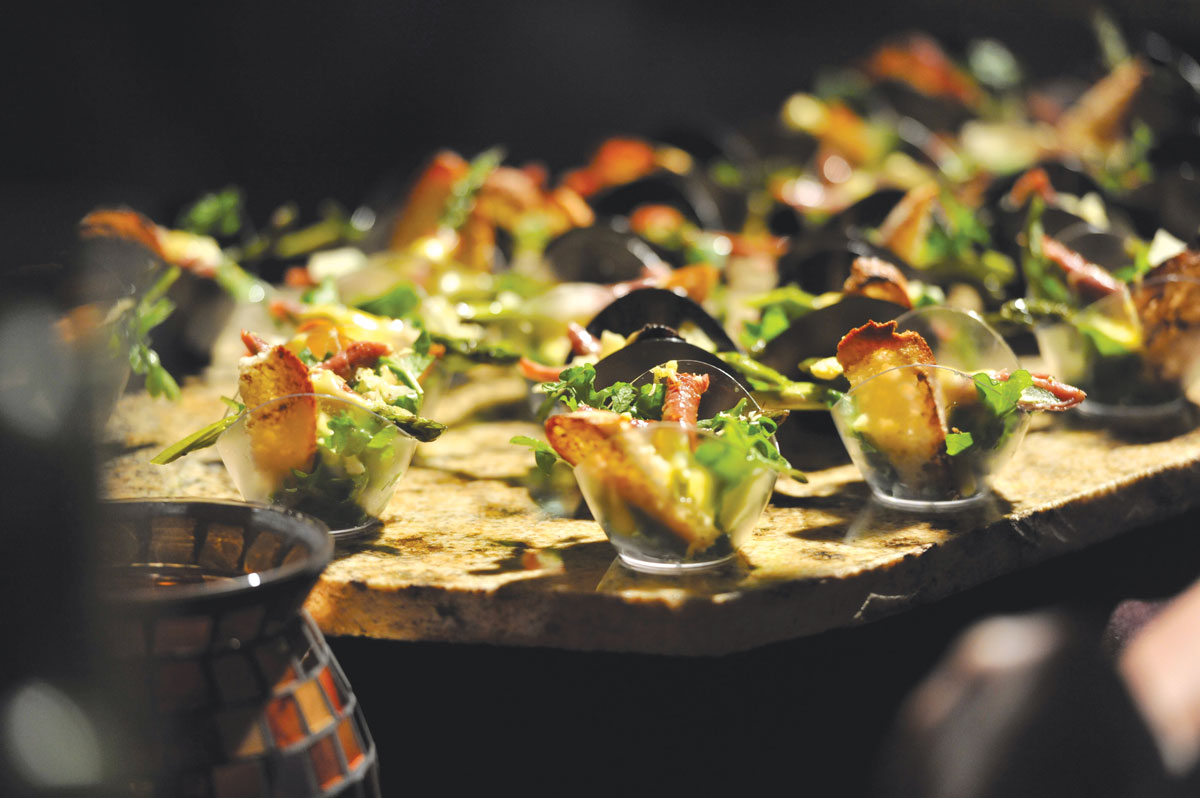 Appetizers from a past Epicurian Delight

In a normal year, the Epicurean Delight gala fundraiser is one of the highlights of the local Arts & Culture calendar, featuring 60 purveyors of food and libations each November. It attracts 1,200 guests and raises essential funds for Vitalint (formerly the Inland Northwest Blood Center) and the Blood Center Foundation of the Inland Northwest. It’s one of the largest one-day food and beverage events in Spokane.

“This year, obviously, we couldn’t host it, and so we shifted our perspective to trying to support the food and beverage industry, who have supported us for the past 38 years, especially because they were so hard hit this year. Even though Vitalint needs help too, we just wanted to show up for our partners,” says Haley Rippee, who coordinates Epicurean Delight.

The “reimagined” event for 2020 is called Bites and Delights. Instead of being a one-night, in-person gathering, it puts a book of vouchers in donors’ hands. Those coupons can then be used to sample an assortment of viands and libations at 36 participating establishments. That can include anything from a free appetizer or dessert to a complimentary wine tasting.

Although Epicurean Delight’s organizers did contemplate a virtual event, they decided that the voucher booklet would be a safe, fun middle ground between the smorgasbord that people have come to expect and the current restrictions on large gatherings.

“Our event is so experience-based,” Rippee says. “Everyone gets to go around and taste test everything, and that’s just not something you can take online. And we’ve had a lot of sponsors come forward with an offer to step up their sponsorship, so we’re able to pay all of our participants very generously this year.”

Shifting to the booklet has had some further unexpected upsides. On top of supporting local food and beverage establishments at a time when they really need the help, it opens the event to more attendees and creates more possibilities for them to sample from a wider range of establishments than one evening would typically allow. The vouchers are valid for both dine-in (conditions permitting) and takeout, and they’re valid through the end of August 2021.

“We’re really pleased with the response from all of our guests. We’ve had so many people who haven’t attended the event before who have purchased the booklets,” says Rippee. In fact, the reception has been so positive that there’s a chance the voucher booklet will continue in some form alongside the in-person fundraiser in the future.

Re-creating the experience of live fundraising events and holiday performances has proved challenging for every arts organization. Despite all that, the Spokane Civic Theatre has been working hard to continue entertaining the community.

“We’ve found a way to bring our holiday show to our patrons safely and virtually,” says Civic Marketing Director Brianna McCracken. In lieu of the planned stage production of A Christmas Carol, the Civic is offering its audiences two alternate versions: a radio play and a streaming performance.

The radio version of A Christmas Carol will be performed by a who’s who of local actors and broadcast for free on Spokane Public Radio at various times through Dec. 24. The streaming performance is a Broadway-quality, nationally acclaimed one-man show starring Jefferson Mays. That can be viewed until Jan. 3; a portion of each ticket sale benefits the Civic.

“It’s something you can gather and do as a family,” McCracken says. And though the radio broadcast as well as the theater’s ongoing Civic Presents streaming series can be enjoyed completely free of charge, she encourages supporters to take advantage of the Civic Eats events, which benefit the theater as well as a local restaurant, or make a direct donation on the theater’s website.

“Every dollar really does make a difference, especially during this pause. So even if they just give $5, for us that’s huge. That’s what keeps us afloat.”

Bites and Delights voucher booklets are available at three different price points and can be purchased online at epicureandelight.org. To donate to the Civic or get more info on the radio and streaming productions, visit spokanecivictheatre.com. Tickets for the streaming version of A Christmas Carol are $50 per household. Use code SCROOGE to get $10 off the streaming ticket price.