Fun in the Kitchen

Back to Business Story, VOL 7: Community 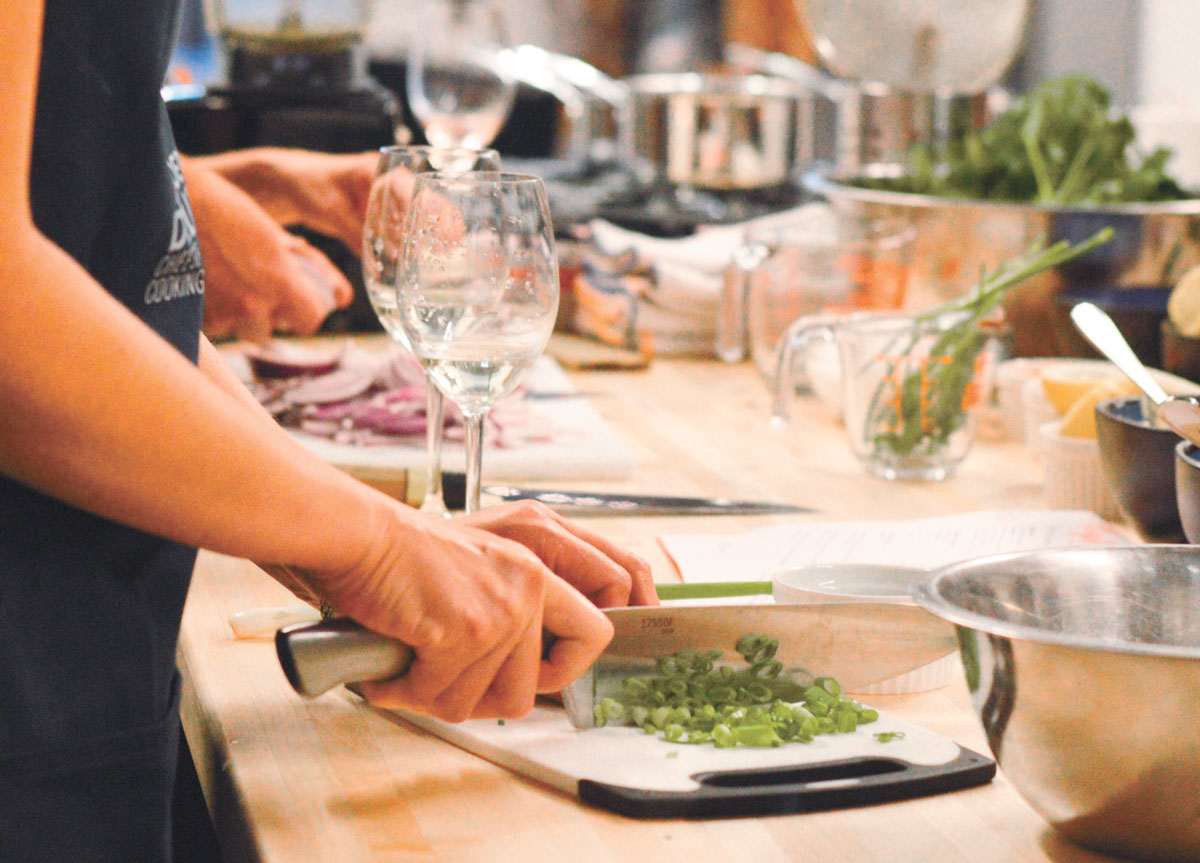 From hands-on learning to virtual classes, home cooks have lots of choices to help expand their skills in Spokane

For many people, one of the earliest, most comforting places to pick up a shutdown hobby was the kitchen, whether baking bread, cooking new recipes or making use of that Instapot for the first time.

Once that kitchen creativity gets flowing, it’s easy to want a new challenge, and thankfully, many people in the area offer lessons for creating next-level recipes from scratch.

After the first shutdown this spring, the KITCHEN ENGINE not only saw a huge uptick in shoppers looking for bakeware, but when restrictions loosened they were able to again offer their popular cooking classes.

With some restrictions still in place, the format was tweaked, explains Eric Frickle, who’s owned the store in the Flour Mill with his parents since 2006. Rather than have large groups around big tables, they started teaching in front of two-person table stations distanced from other students.

For two people, the price usually ranges from about $110 to $130 per class, he says, which includes hands-on instruction for about two hours, eating the meal you make (and sometimes taking home leftovers), and a discount on any kitchenware you might need.

“Some of our more popular classes are sushi, pasta making, and we do artisan pizza,” Frickle says. “In the past we’ve had baking classes that include pastries and bread — it depends on what chefs and local enthusiasts I’m able to find to do the classes.”

Classes are again temporarily halted during the current shutdown, but there’s a bright future, as the store plans to open an even larger adjacent space sometime next year that will be solely dedicated to cooking classes, Frickle says.

“Keep an eye on our website, and we do send out a newsletter, so we’ll try and keep people up to date on what’s happening with classes,” Frickle says. “As soon as we’re able to offer them again, we will.” (Find more at TheKitchenEngine.com.)

Meanwhile, over at WANDERLUST DELICATO, owner Amber Park made a similar shift to two-person class registrations for her popular classes, with 10 people total allowed under the rules this fall.

In a year when few people got to travel anywhere, Park says she tried to offer some fun culinary adventures for the taste buds, with tastes of Greece, Italy and France. Classes usually start at $45 per person, and for the destination classes, which included wine pairings to go with the meals students prepared, it was $160 per couple.

“Thankfully we have a huge beautiful kitchen that’s big and open,” Park says. “We really focused on destination classes as a way to satisfy the wanderlust we all have right now.”

During those classes, music from the region of focus might even help set the mood.

Under current restrictions, those classes are on hold, but Park says she still offers gift certificates for the classes that can be redeemed later. Plus, she’s been able to work with some companies to offer corporate team building where employees get gift baskets with some needed things (say, a ravioli stamp) and each person shops for their own ingredients in advance of a short virtual class.

Until classes can open again, Park plans to keep the kitchen in use by continuing to prepare meals for Hope House at least once a week. (Find more about future classes at WanderlustDelicato.com.)

Luckily, there is at least one local business that’s been successful this year at offering online cooking classes. Registered dietitian nutritionist Monika Jacobson (who coincidentally has taught at Wanderlust Delicato before) says her business EAT MOVE THRIVE SPOKANE has seen a wonderful response from people interested in her cooking classes taught over Zoom.

“I did the first cooking classes back in May, and I kind of threw it out there as, ‘Well, I’ll see how this goes,’” Jacobson says. “Honestly, I hadn’t heard of anybody doing them yet.”

The response was great, with many people signing up.

“I think timing-wise it was really good. Everybody was really tired of being inside and super bored, and the weather wasn’t amazing yet,” she says. “People missed seeing family and friends, so a lot of times people will gather a group of family or friends together for one of my classes.”

Adult classes run between $12 and $15 per person, and participants get a recipe and shopping list the week before so they can have everything ready when they sign on.

Jacobson has also started a kids cooking club that’s $65 for four weeks of classes and includes an apron, or $189 for 12 weeks.

“I think it’s really important that kids build a healthy foundation with their relationship with food and cooking at a young age,” she says, noting that parents have told her their children seem more willing to try new foods when it’s something they’ve cooked themselves.

Some of her adult classes have been held on Sunday afternoons, to help prep or meal plan multiple things for the week ahead, with nutrition and health in mind.

“We’ll often cook stuff that can hold up well in the fridge for a few days, like a big pot of soup or refrigerator salads where you make this on Sunday and have lunch for the next few days,” Jacobson says. “I think my classes stand out as something unique because they’re run by a registered dietitian, so I’m adding a lot of nutrition tips and facts as I go.”

Find more about her schedule of classes at EatMoveThriveSpokane.com.