Back to Business Story, VOL 7: Community 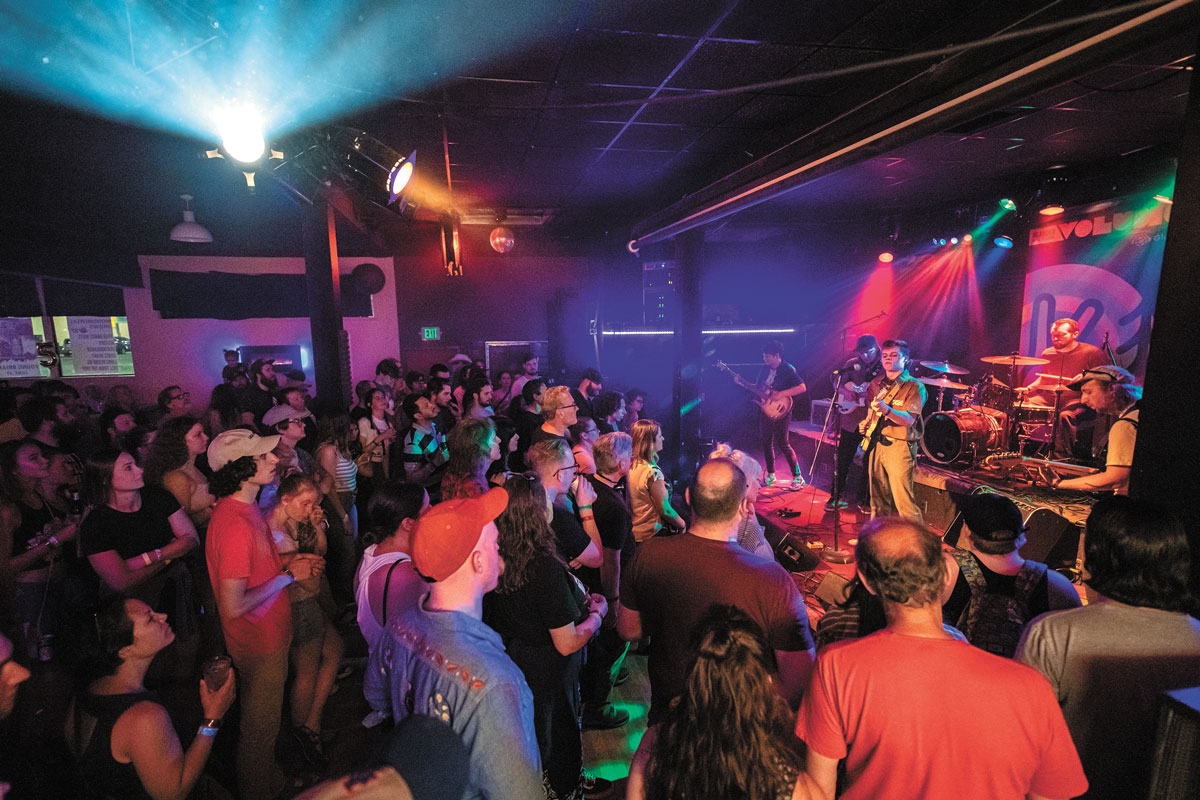 The banner that’s covering the entire facade of THE BIG DIPPER is designed to make you stop and read it. The all-ages music venue, which has sat on the corner of Washington and Second for decades, is normally pretty noticeable on its own, with its blue brick exterior and the astrological mural on one of its walls.

But this banner has a decidedly more capitalistic feel to it, and it might stop you short. In fact, it looks like the sort of thing a high-end real estate company might drape over a building they’ve just acquired to either knock down or fill with expensive condos. And that’s the idea.

“The hope is that people will see that that’s not actually what it is,” explains Dawson Hoerner, co-owner of the Big Dipper. “But it’s what it could be if we weren’t able to get any help.”

The banner comes courtesy of Keep Music Live, a nationwide initiative started by indie music venues and designed to raise awareness about the plight of concert venues everywhere. (You can donate to the Washington state campaign at keepmusiclivewa.com.) The organization has even lobbied Congress for financial assistance. After all, they were some of the first businesses to close their doors when the COVID-19 pandemic struck, and they’ll be among the last to reopen when the virus has finally been contained.

So the Big Dipper isn’t going anywhere for now, but it has been sitting silent since March, much like SPOKANE ARENA, BERSERK, BING CROSBY THEATER and other music-focused venues. There have been some attempts to host livestreaming concerts or other fundraisers, Hoerner says, but none of them have quite taken off. For now, they’re playing the waiting game.

“It feels lonely when you go down there,” Hoerner says “We don’t know when we’ll be open again. People contact us, asking me about [booking] dates in spring and summer, and I don’t really know what to say. We’re definitely in a limbo.”

That purgatorial waiting period has affected everybody. THE PIN, an all-ages club that amassed a following for its blend of hard-rock concerts and drag shows, shut its doors earlier this year, citing the pandemic as a contributing factor.

Livestreams have been an alternative source of income both for venues and artists while in-person performances are a no-go. LUCKY YOU LOUNGE, the Browne’s Addition restaurant and venue, has hosted several prerecorded, slickly produced concerts in the final months of 2020. The downtown staple BABY BAR, which has long been a go-to spot for touring indie bands, has also been hosting livestreams, with a roster of virtual concerts and comedy shows booked well into 2021.

There does seem to be light at the end of the tunnel, however. Sen. Amy Klobuchar, one of the co-authors of a bipartisan COVID-19 relief package, told Variety that she was confident the Senate would pass the bill this month. If that happens, it could mean that billions of dollars in relief funds, spearheaded by the National Independent Venue Association and their Save Our Stages Act, could be headed down to small arts venues.

That would likely be a life preserver for a lot of venues like the Dipper, whose business models rely on full-capacity crowds.

In the meantime, Hoerner says she and her husband and co-owner, Dan, are focused on boosting the voices and virtual events of other local musicians and businesses, including the aforementioned venues, through social media. It’s important, she says, that cities everywhere maintain and foster their arts scenes, not only because it contributes to the economy, but because it hopefully inspires people to expand their horizons.

The thrill of seeing live music is still second to none, and after such a long drought of concerts, the eventual resurrection of live music will no doubt be as vital as ever.

“It makes downtown interesting, and makes the culture interesting. It brings new ideas to people … and gives them an opportunity to experience or feel something they might not think about,” Hoerner says. “It’s a personal experience, where you really feel like you’re part of what’s happening.”