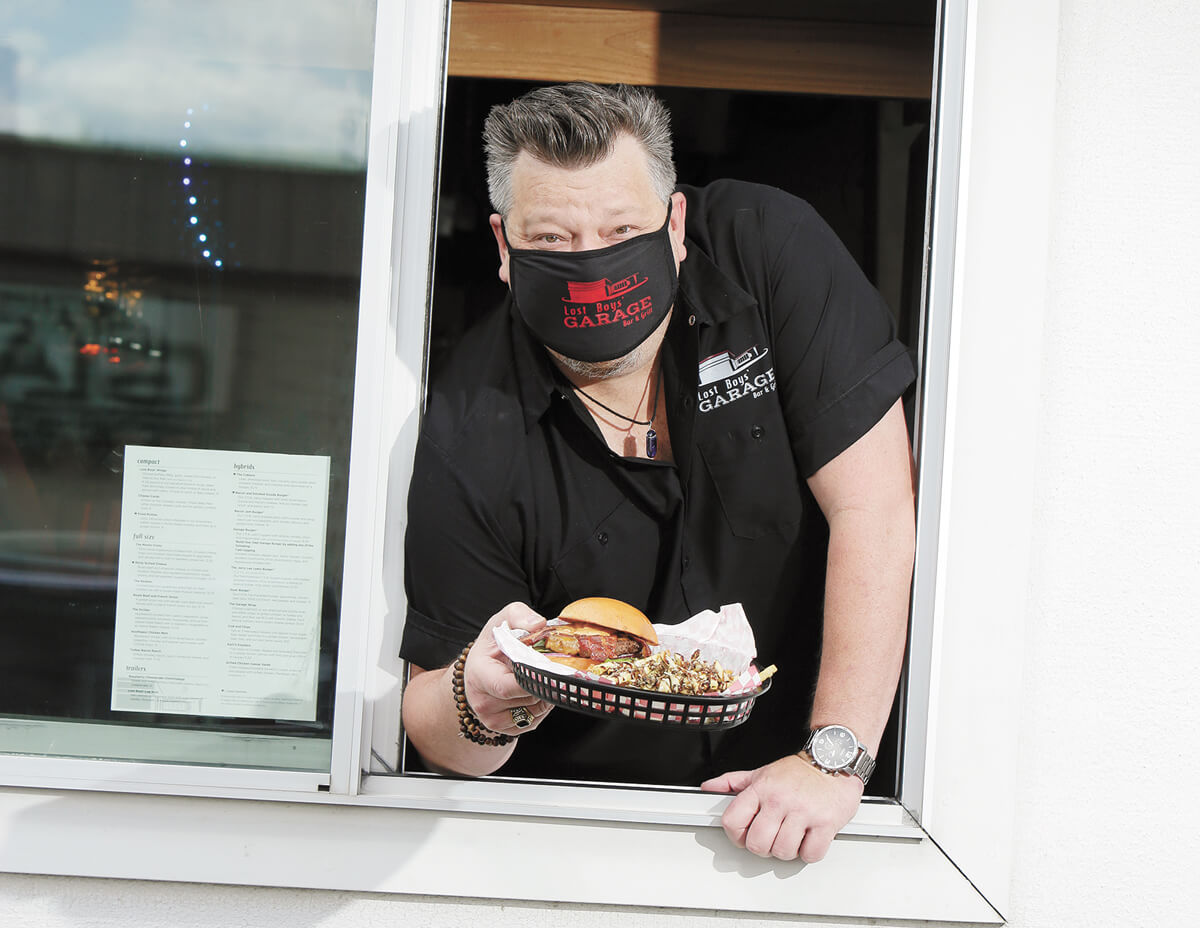 When COVID-19 hit the Pacific Northwest, forcing the entire food-service industry into lockdown for more than two months, restaurants had no choice but to get creative.

By signing up for third-party delivery services and quickly pivoting to sell food to-go, many of the region’s local restaurants were able to temporarily stem some of those drastic early sales losses.

Even since dine-in service resumed in mid-May at half of restaurants’ usual seating capacity under Washington state’s Phase 2 requirements, delivery and takeout orders remain a vital source of sales, and a safe alternative for customers still wary of public settings.

At TRUE LEGENDS GRILL in Liberty Lake, the mix of dine-in, takeout and delivery service has been so successful that its chef Kyle Barbieri says sales are actually higher, by about 20 percent, for the restaurant than before COVID-19’s arrival.

“We’re usually at the max capacity that we can have every single night inside, on our patio and terrace,” Barbieri says. “People are really starting to come back, but what happened during [lockdown] is that they got used to carry-out, and those numbers were maintained when we opened our doors back up.”

True Legends uses DoorDash and Uber Eats for delivery, but Barbieri says most of its takeout orders are placed through its website, via a third-party platform, Menufy, which takes a 12 percent cut.

“Most people go directly through our website. They still want carry-out but want to get out of the house,” he notes. 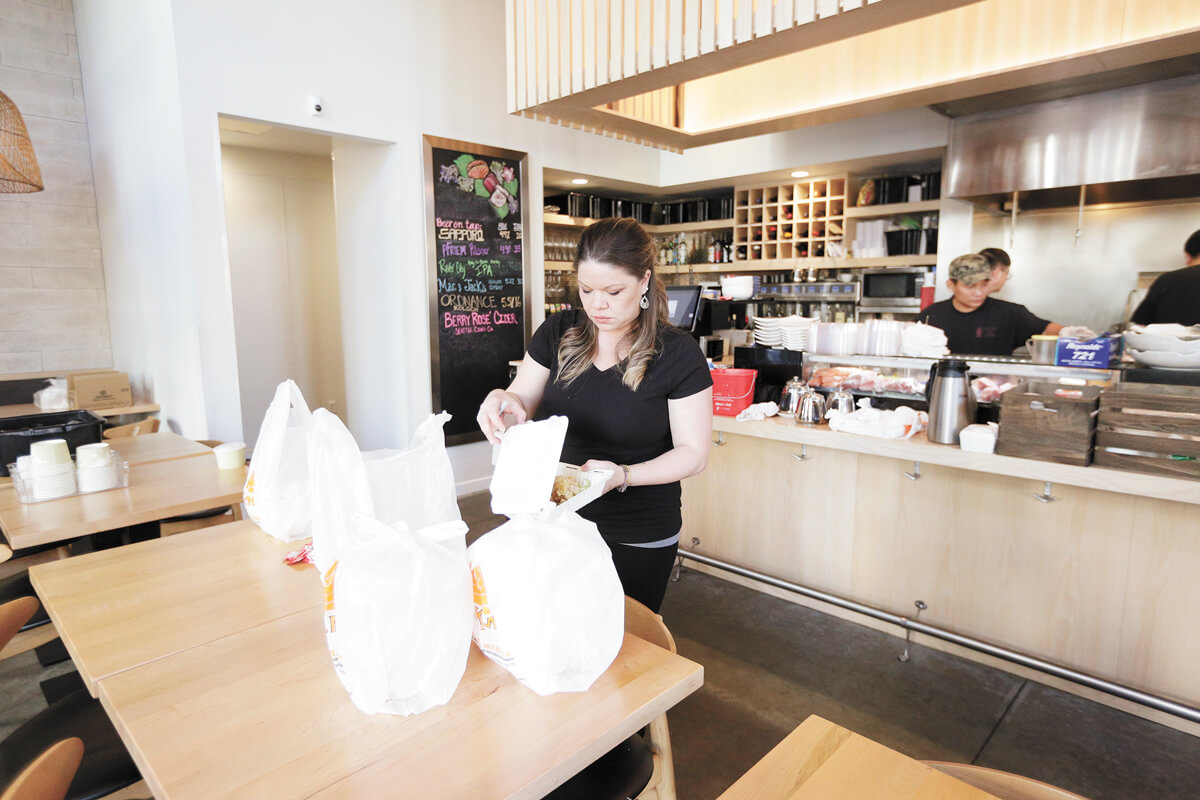 Customers can also grab takeout from True Legends by calling in an order by phone, or placing it in person if they don’t mind waiting in the car while their food is prepared.

“People have free time so they’re looking at their phone and you have to be on top of it and let them know what you can do. That is something we really embraced,” he says.

In North Spokane, casual bar and pub LOST BOYS GARAGE has been signed on with a few food delivery services since last year, initially with the goal to capture a few extra sales on the side.

Now, however, orders placed for delivery or takeout amount to between 30 percent and 40 percent of its total sales, says Lost Boys co-owner Kevin Pereira.

“We were pretty much set up when [the pandemic] happened, and our sales just went through the roof for deliveries,” Pereira says.

Lost Boys is currently partnered with DoorDash, Uber Eats and the local Treehouse Deliveries. Orders for pickup can be placed on its website or called in.

“For deliveries, roughly, I’d say we have about 100 a week, and then for takeout we’re still doing 10 to 15 orders a day on average,” he continues. “Whereas before COVID hit, for takeout and deliveries combined I would guess it was maybe 5 percent of business. You can see the landscape has definitely changed, even with people able to go out and eat in restaurants.”

Many locally owned restaurants in the Inland Northwest are newcomers to the delivery scene as of this spring, and have opted in favor of a local company for that service. 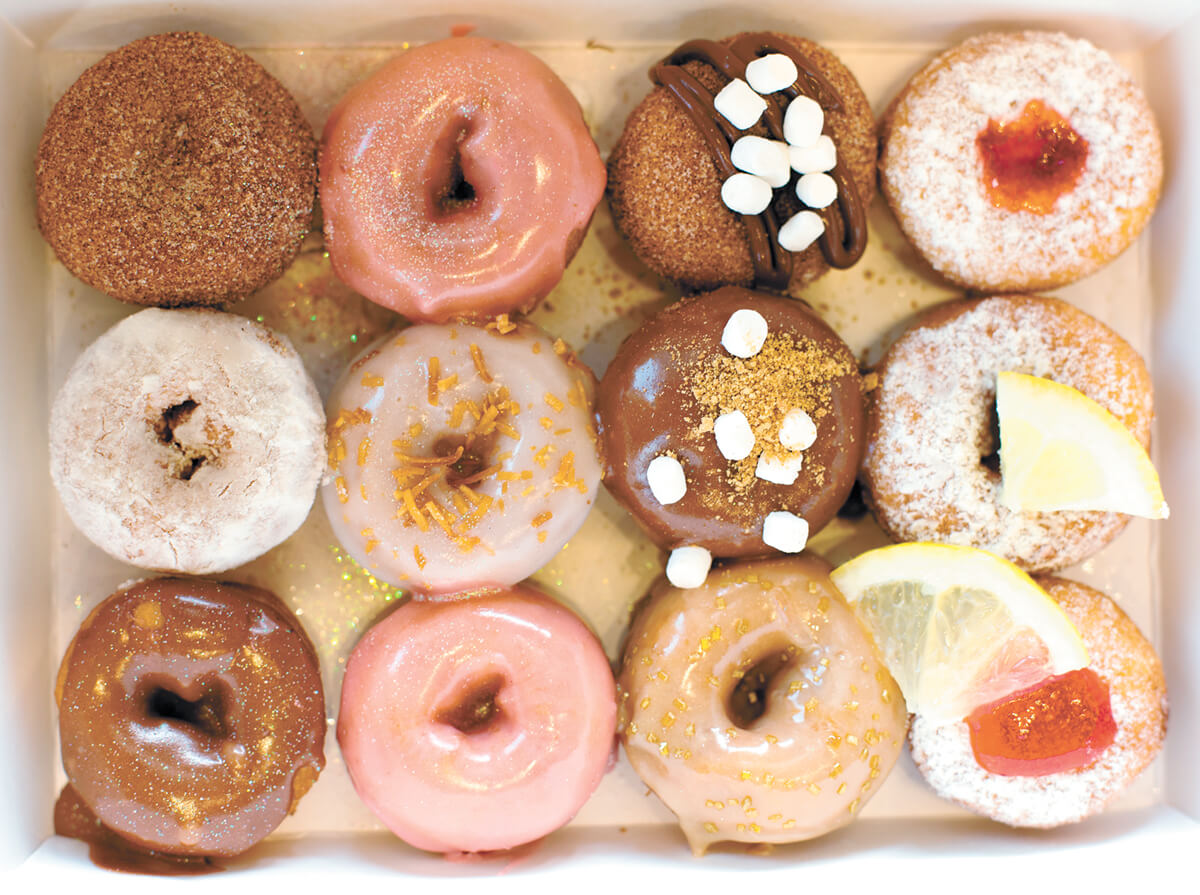 TREEHOUSE DELIVERIES is an increasingly popular alternative to nationwide services like Uber Eats, Grubhub, DoorDash and Postmates. Like those competitors, customers can visit Treehouse’s website (treehousespokane.com) and browse by cuisine, distance, newness and other characteristics before placing an order through the site from the restaurant of their choice. The company services restaurants in Spokane and Spokane Valley, charging a $5 delivery fee for the first 5 miles or less from a restaurant’s door to delivery address, and $1 per mile beyond those first 5.

Contracted drivers for Treehouse pocket the delivery fee, plus tips, while Treehouse takes a 15 percent cut of the food total. Owner Neil Holford says Treehouse’s fees are about half of what national competitors like Uber Eats charge.

Treehouse currently has nearly 100 local restaurant partners, up from about 40 total pre-pandemic. Restaurants in its catalog range from sushi spots, like CHEF LU’S ASIAN BISTRO and UMI KITCHEN & SUSHI BAR, to sweet treats from DONUT PARADE, HELLO SUGAR and SWEET FROSTINGS, plus plenty of other cuisines diners may crave.

“It seems like we’ve gotten word of mouth from social media, and restaurants with us are realizing that the percentage we charge is a lot better for them and everyone else,” Holford says. “Some that didn’t have delivery before are booming, and we were their first partner and they don’t want to go with anyone else because the numbers are really good.” 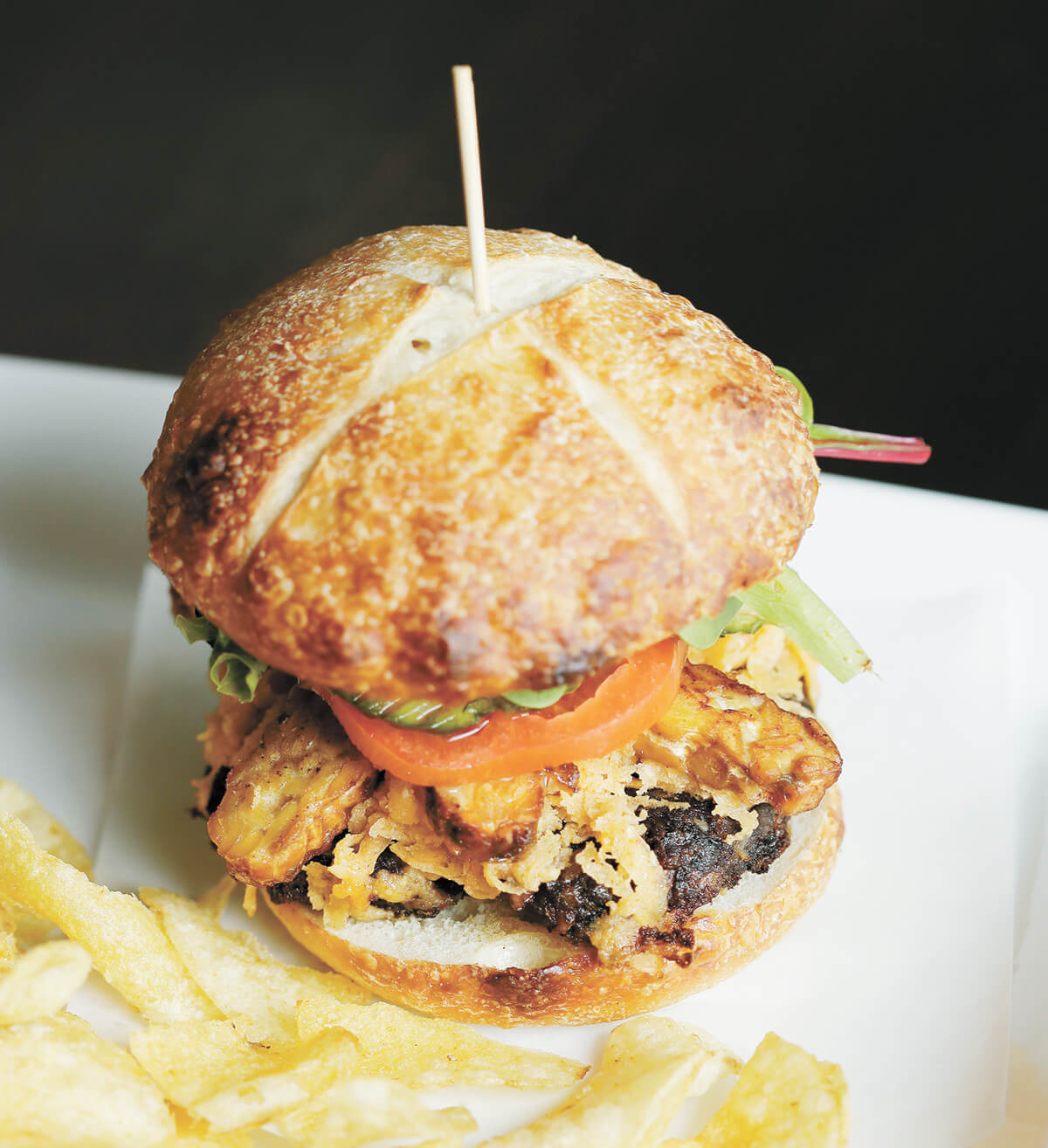 ALLIE’S VEGAN PIZZERIA AND CAFE on the South Hill is one of those partners exclusively utilizing Treehouse to reach its delivery customers, in addition to orders placed directly for pickup.

Owner Atania Gilmore hasn’t opened the vegan restaurant’s dining room at all since initially closing down in March. The space is too small for her to justify removing half the seating to meet current dine-in guidelines. While the weather allows it, however, Allie’s offers limited outdoor seating on its patio.

“It’s been working well, and I think one advantage I had is that I started working with Treehouse the year before this,” Gilmore says. “Between that and takeout, I felt like it was easy for us to meet the demand early on and make the switch over.”

BRUNCHEONETTE in downtown Spokane is another local eatery that’s chosen to solely partner with Treehouse to deliver its food.

“I wasn’t really crazy about Uber Eats or others because their fees are really high,” says Bruncheonette owner Joile Forral. “And we’re definitely really big supporting local, so Treehouse was a no-brainer if we were going to dive into the option of adding delivery.”

She says the delivery service, paired with takeout orders placed by phone or on its website, has allowed Bruncheonette to reach more customers while at half capacity, and to edge closer to pre-pandemic sales levels. 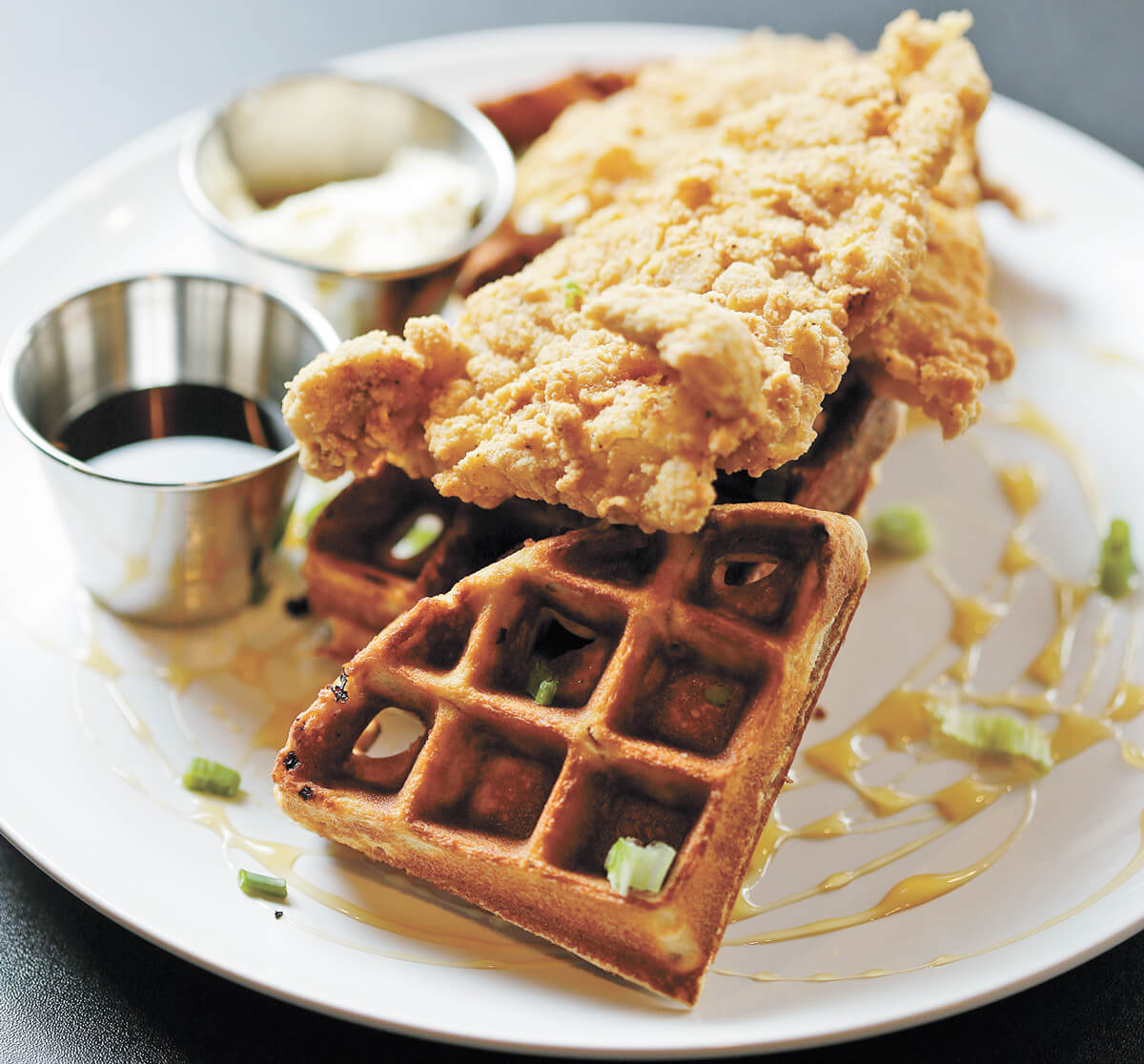 “It allows us to serve more people because wait times for 10 tables can get pretty long, especially if we’re busy,” Forral says. “And the kitchen is still running at 100 percent capacity.”

At Allie’s, Gilmore estimates sales have slowly recovered since March, yet still haven’t reached pre-COVID levels. About one-quarter to one-third of Allie’s orders are deliveries, with the rest placed by customers for self-pickup. Even though her customers seem to prefer takeout, Gilmore says Allie’s is seeing three to four times more delivery orders now than pre-pandemic, and she expects that trend to continue into next year, or longer.

“I have been feeling very fortunate that customers have been supportive of still getting food through takeout and delivery,” she says. “It’s made me think that toward the future I would like to add more grab-and-go options, including hot and cold food, just to make it easy for people to pick up food and give them more variety.”